Dr Damian Milton is one of the pre-eminent thinkers and presenters in the autism field in the UK and is gaining an increasing reputation internationally. He is a member of the scientific and advisory committee of Research Autism and is  Head of Autism Knowledge and Expertise at the National Autistic Society. Damian is also a researcher for London South Bank University. He has worked on a number of projects for the Autism Education Trust, as well as autistic-led ventures such as the Theorising Autism Project. Damian holds academic qualifications in Sociology, Philosophy, Psychology and Education, and has experience in both the Further Education and Higher Education sectors. His interest in autism began when his son was diagnosed as autistic at the age of two: he was also diagnosed with Asperger’s in 2009, at the age of 36. Damian’s growing publication list includes On the Ontological Status of Autism: the ‘Double Empathy Problem’ (2012) and So what exactly are autism interventions intervening with? (2014). He is currently part of a research team looking into the potential benefits of person-centred mentoring for adults on the autism spectrum, and is an advisor on the Transforming Autism Education (TAE) project.

Damian conducts a pilot study as part of his PhD at the University of Birmingham, in 2014.

The main feelings I have with finishing my doctoral thesis are those of relief and a form of contentment at having completed a project of personal (and hopefully wider) significance. Practically speaking I have more time now for paid employment. Having been a self-funded student, successfully navigating through a doctoral program has been a financial challenge. In some ways though, my ‘mind set’ has remained constant throughout my adult life in regard to some of the ideals I work toward, for instance, being a guide to the learning of those who could be said to be of a divergent disposition to normative expectations. I have learnt much from the diversity of human life and so I like to support those who may have been at some previous point outcast as ‘failures’. If anything, completing my doctoral thesis helps me to pursue this end further.

The concept of flow states originated in the field of ‘positive psychology’ and work of Mihaly Csikszentmihalyi (1990). A flow state is said to contain a number of differing aspects working together simultaneously, these being: an intense concentration on the present moment, the merging of action and awareness, losing track of one’s sense of self, a sense of personal control over a situation or task, distorted perceptions of the passing of time, and the experience of an activity being intrinsically rewarding or ‘autotelic’.

Damian as a child, perhaps not in a ‘flow state’.

Anyone can enter into a flow state, particularly when focusing on a task with intrinsic value to the individual, and where there is a balance between the challenge perceived in an activity and the resources one has at one’s disposal to meet such a challenge. Interestingly however, Csikszentmihalyi hypothesized that one could be said to have an ‘autotelic personality’ where particular personality traits would lead to more flow state experiences. These traits include: curiosity, persistence, and a tendency toward performing activities for their own intrinsic value. As we mentioned in an article that I wrote with Andy McDonnell (McDonnell and Milton, 2014), the repetitive behaviours often described in association with autistic people can be seen through this lens. It is interesting that you should ask whether flow can be measured. Any measurement would be indicative of flow rather than fully capturing the experience, yet this is an area that I (and colleagues) would like to look at in future.

Awareness and understanding about autism within the general population is certainly increasing, yet of course there is much work to be done in this area still. Recently the National Autistic Society (NAS) launched a campaign called ‘Too Much Information’ (TMI), where in consultations and surveys in preparation for this campaign, it was found that nearly all of the general public have heard of autism, yet very few autistic people and their families feel that their needs are well understood. Although autism seems to be attracting a great deal of media attention of late, such understanding will only improve with a decrease in stigma, and a diverse range of experiential accounts being aired. Full empathy however is an impossible goal, and I would suggest that we should all try to be humble in our interpretations of others.

At the Autism Europe conference in Budapest (2013). Damian was the lead consultant on the development of the ASK autism modules 2012 – 2014.

The term intervention is a problematic one in itself. Although at its most simple, it describes doing something and then measuring the consequences of that action, the term is often used within a medical context. Therefore, as a term it lends itself to the discourse that autism is a medical disorder in need of normative ‘intervention’ – i.e. a deficit / remedial model. As I suggest in this article, most autism interventions have originated in behaviourist or cognitivist-functionalist paradigms of learning and psychology and are usually remedial and normative in outlook.

In my PhD, I found that there was a tendency amongst non-autistic parents toward a preference for individualised and somewhat remedial interventions. However, the outlook of autistic people was quite different, with a strong cohort of the sample expressing views more akin to a radical / critical pedagogy and a social model of disability. It is often said to me, ‘but isn’t this what all parents do’ with regard to particular interventions – my response to that as a parent, is that I would try to utilise an eclectic array of strategies to try and help my child and any decisions would also be dependent on context. Given the tensions between views in the field, I personally see such a reflective and eclectic approach as the only sensible way forward.

5. You speak at many conferences and in so doing, often advocate strongly for the rights of autistic individuals. But what do you say to people who assert that, as an articulate, confident person, with high level qualifications and professional experience, you can only represent a certain subset of autistic people?

I would say that it is not me who is misrepresenting the views of others. To explain, I represent my own views, as an autistic person, a father, an academic, and a member of autistic communities and culture. I am not a politician and do not claim to represent others. As an academic I will study and represent the views of others as best I can in their own words and then will give my own interpretations and critique. As an activist, I will argue in favour or not of certain theoretical frameworks or practices in solidarity with others who may do so.

At the AutismCon 2016. Damian was part of a panel considering ‘Awareness Versus Acceptance’.

My experiences do not represent those of my son (as an example), but nor do anyone else’s. I would say though that in my own journey as an autistic parent I have often found the insights of other autistic people invaluable, whilst this has been a less frequent experience for me in relation to those who claim expertise in the field, but who lack such a personal connection.

6. I know that you often use humour to reinforce the points you are making in your academic presentations. Do you have a favourite joke you would like to share with us?

The joke that springs to my mind is one from Monty Python’s Life of Brian:

Voice from the crowd: I’m not. 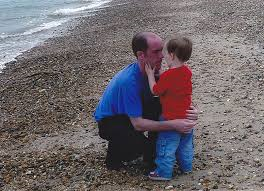 Damian with his son.

More information on Damian’s publications can be found here:

McDonnell, A. and Milton, D. (2014) Going with the flow: reconsidering ‘repetitive behaviour’ through the concept of ‘flow states’. In G. Jones and E. Hurley (Eds): Good Autism Practice: Autism, Happiness and Wellbeing, pp. 38 – 47.

One thought on “Interview with Dr Damian Milton”