Professor Liz Pellicano is a developmental cognitive scientist in the Department of Psychology and Human Development at University College London and Director of the Centre for Research in Autism Education (CRAE) at UCL Institute of Education. She is committed to understanding the distinctive opportunities and challenges faced by autistic children, young people and adults and tracing their impact on everyday life: at home, at school and out-and-about in the community. Liz is also dedicated both to ensuring that the outcomes of her research are as influential as possible in education policy-making and to enhancing public understanding of autism. Her research projects include ‘Seeing the World Differently’, supported by the Medical Research Council, and ‘A Future Made Together’, funded by Research Autism. One of her more recent publications is ‘Sensory symptoms in autism: A blooming, buzzing confusion?’ (2013). In recognition of her outstanding work in the field of autism, Liz was awarded one of the prestigious Philip Leverhulme Prizes in 2015.

Members of CRAE ran a ‘Makes Sense’ stall at the Green Man festival in the Brecon Beacons in August, 2016.

Before I started my PhD in Perth, Western Australia, I began working with a little boy, a 4-year-old, who had only recently received a diagnosis of autism and he had very little language at the time. I only saw him once a week for one hour at a time, but during those sessions, we worked on speech and language activities to try to improve his comprehension and expression. Over those first few months, he and his family just inspired me more and more. The family had some really trying times, but seeing the love and support they gave him – and he gave back to them – was just wonderful. So that’s how I became interested in understanding more about autism. I wanted to know more about the opportunities and challenges of being autistic and the most effective ways of supporting them. At the same time as doing my PhD, I was also training to be an educational psychologist so my focus was both on theory and practice. And it all went on from there.

2. What in your view have been the main changes and developments which have taken place in the context of autism research over the course of your career so far?

I’d like to say that we know much more about autistic perception and cognition … but I’m not entirely sure we do! When I was doing my PhD, just like many people, I was excited by Uta Frith’s notion of weak central coherence, particularly because it tried to explain some of the strengths and apparent weaknesses in autism. Even though I’ve spent a great deal of time thinking about these issues, we still don’t know for sure how autistic people perceive and interpret the world around them.

So I would have to say that the biggest (and best) development that I have seen is the way that many (though by no means all) people think about autism. When I started my PhD, researchers and practitioners spoke of deficits, dysfunctions, disorder, even disease. Now, people are at least a little more attuned to the fact that we are talking about people – real people – for whom the use of such terms is disparaging at worst and thoughtless at best. We have also seen a gradual shift towards greater involvement of autistic people in the decisions that affect them – whether that be in research or in the kind of education or support they receive. There is still a long way to go in this regard but it is encouraging to see that we are at the beginning of what I think of as a new era of thinking about autism.

People will have different opinions on this issue. My own view and the one that we take in the report is that the ‘broader autism community’ should reflect all of those people who are touched by autism in some way – autistic people, their family members and friends, and those who support them. Within this broader group, there will no doubt be diverging perspectives of what it means to be autistic and how we should help autistic children, young people and adults to live fulfilling lives, and those differences will be difficult to resolve. But we refer to a ‘broader’ autism community because I feel that non-autistic people need to do what we can to stand together and support autistic people. By doing so, I really think we can transform the future of autism research and practice and ultimately the future lives of autistic people. 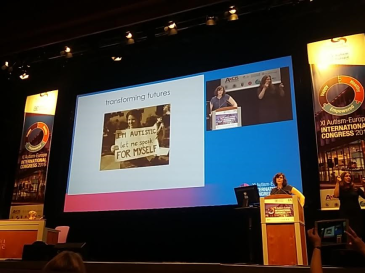 4. One of the findings from A Future Made Together was that interventions were a low priority for autistic people, but of much greater importance for family members, practitioners and researchers (p. 30). What do you think the reasons are for this divergence in views?

In this study, we asked people to rate the relative importance of thirteen ‘priorities’ for research. The one that you refer to was “What are the best ways to treat the core symptoms of autism?” The wording here was quite deliberate, because that is what many current interventions aim to do, they seek to improve an individual’s ability to relate to, and communicate with, other people – in effect, they try to make people less autistic. It is not surprising, then, that autistic adults rated this issue as less of a priority compared to other issues.

5. In the report ‘My Life at School: Understanding the experiences of children and young people with special educational needs in residential special schools’ (2014), Maggie Atkinson, then the Children’s Commissioner, stated that where ‘children cannot articulate their concerns easily, this places an even greater responsibility on adults to work hard to understand what children’s wishes and interests are.’ (p. 4). Later in the report, there is reference to ‘false types of participation’ (p. 44). What did you mean by this and how did your team deal with the issue of understanding the views of children with limited spoken communication, for example?

False types of participation largely refers to participation that is tokenistic in nature, that often is the result of tick-box exercises in which the child, young person or adult’s participation has little – or no – impact on the issue at hand. Gaining the views of children and young people with limited spoken communication is notoriously difficult. They can’t tell you what they think or feel in the usual ways. So, in this study, we used methods that would allow us to get a sense of their everyday experiences and therefore the degree of involvement in their learning.

“Gaining the views of children and young people with limited spoken communication is notoriously difficult. They can’t tell you what they think or feel in the usual ways.”

For a small number of young people, we shadowed them from the moment they woke up to the time they went to bed. We carefully observed their interactions with staff and measured the extent to which they made bids for interaction and whether these bids were reciprocated by the people working with them, and whether their learning tended to be directed more by the young person or by their teacher. These methods were, of course, indirect but they did give us some clues as to the degree to which young people had some ‘say’ over everyday decisions at school and at the ‘home’ part of school.

6. The report also highlighted some complex issues in terms of the relationships children form with staff (e.g. pp. 71 – 73). What, in your view, would be an ‘ideal’ staff-child rapport in a residential special school?

A significant portion of children and young people with special educational needs living in residential special schools rarely get to see their families. For some of these children, who are ‘looked after’, the school community is their family. Young people in these schools told us how much they valued the relationships with the staff that supported them.

But there were some carers and support workers who were anxious about these relationships. They didn’t want to give the wrong impression, that they were there “not as a friend” but to support the young people. I understand where these anxieties stem from but I feel that distancing themselves in this way is potentially very damaging to the child or young person. These children and young people deserve to be loved and cared for and to experience stable, nurturing relationships, just like any other child. Withholding these relationships only places these children and young people at even greater risk of social and emotional problems in the future.

7. Finally, how do you like to spend time away from your research?

I’m not very good at spending time away from my research! Although my little girl has taken care of that. She’s at an age where she’s into absolutely everything – it’s all new to her, and that’s just lovely to watch.

My Tweets
Join 71 other followers